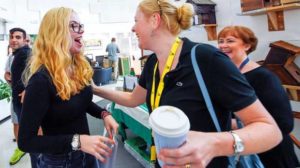 Dubai: Over 3,500 students in the UAE who appeared for their General Certificate of Education Advanced Level (GCE A level) examination had a reason to smile as results were declared on Thursday morning. This year, there was an 11 per cent increase in the number of students appearing for A level examinations as compared to 2016.

Gems Education students across seven schools in the UAE that offer A levels did particularly well with over 46 per cent achieving A* to A grades and 69 per cent achieving A* to B grades, reflecting an increase of seven per cent in their A* and A grades in overall results. Of over 400 examination entries at Gems schools, 19 per cent achieved the prestigious A* grade, and 52 per cent of all results were at either A* or A grade. A large number of students from Our Own English High School, Al Ain, The Winchester School – Jebel Ali, The Cambridge International School – Dubai, and Jumeirah College have received four A* grades.

Simon O’ Connor of Jumeirah College, Dubai, which sent the largest cohort of 138 students, was delighted by the performance of his students. “We had seven straight A* students — of whom two students got four A*s and five got three A*s.

“There was a level of uncertainty because of new specifications. But our students have done it again. The school has achieved record results every year for the last three years, and I am thrilled that even last year’s amazing results have been surpassed. It all has to do with the amazing relationship that the three groups — the staff, the teacher and the students share. I would like to commend my entire staff that has lent such continuous support to the students and of course to the hard work of each and every student.”

Sir Christopher Stone, chief education officer, GEMS Education, said: “I would like to congratulate the students, teachers and parents on yet another successful year. We are excited to see that these great results will mean that our students can accept offers to some of the very best universities and colleges in the world. We are genuinely proud of them and their achievements.”

[Devika Dahiya (left) reacts after getting her GCE A level results along with her mother at Jumeirah College Dubai.]

At the Dubai British School run by Taleem in Emirates Hills, of the 61 students who appeared 20 per cent achieved A*. The top three students were Benjamin Bristow (4 A*s), Aline Andriyanova (3 A*s) and Keelan Cooper (2 A*s and 1 A).

Principal Brendon Fulton at DBS told Gulf News: “We are absolutely delighted with the performance of our A-Level students this year, who, in the face of significant curriculum changes, pulled out all stops to record an excellent set of results. At the top end, we will be sending straight A*/A students off to prestigious universities such as Cambridge, and across the board we expect almost all of our students to get into their top choice university.”

Nidhi Kumar, a student from Cambridge High School, Abu Dhabi, is the top scorer at the A level examinations across the UAE achieving the dream result of five straight A*s.

Her subjects were maths, biology, physics, chemistry and English literature and she intends to pursue pure mathematics graduation at the University of Waterloo in the forthcoming academic year. A topper at the IGSCE in her school with 10 As, Kumar is no novice at this. She has been consistently and steadily delivering her ton at academics right through grade 3 when she joined this school. She told Gulf News: “I am still finding it difficult to believe I achieved the top status. I am thrilled.”

Excelling at all subjects including humanities, Kumar had a dilemma about choosing mathematics for her graduation. “I love all subjects equally, but my family naturally gravitates to sciences with my mother being a former science teacher and my dad an engineer. I eventually went their way and choose a science subject. However, my younger sibling Navya, a topper at Grade 10 already and artistic, might buck this trend.”

Kumar says the secret of her success is consistent and continuous hard work. ”I always got my eight hours of sleep, ate well and on some days, I would put in five-six hours of study and on others only two hours. But I always planned well. For an examination in May, I would begin as early as September. My approach to studies was to do my own work and reach out in class with questions I could not answer myself. I have to thank my parents for giving me the freedom to be myself and study the way I wanted, and my teachers for reposing faith in me and working hard with me.”

Amritz Ansara from Jumeirah College excelled with straight four A*s in chemistry, maths, further maths and physics and plans to study engineering at Cambridge. He is awaiting the results of a STEP examination he gave towards ensuring his seat at Cambridge. “I focused on reading the textbooks well and practising on a lot of past papers. I am so excited and thrilled at the potential this result has opened up for me. I thank my teachers and the school for working so hard to help me realise my potential, “ said the 17-year-old Malaysian expatriate.

Carmen Burfield of Jumeirah College achieved three straight A*s in art, photography and English and plans to go for her graduation in photography to Bournemouth University, UK. “I plan to be a travel photographer and I am thrilled my results will help me work towards that.”

Devika Dahiya from Jumeirah College with two As and a B is relieved that her results will help her qualify for a five-year degree course in medicine at the Royal College of Surgeons in Ireland. “I always wanted to be surgeon and my results will help me fulfil that dream,” she said.

Tom Bennett, with one A and two Bs, plans to go to the Exeter University for an undergraduate course in Finance and Economics. “I want to thank my school and teachers for their unstinted support,” he said.

Emirati students in the US unconcerned by the Trump effect