The Vice President and Ruler of Dubai toured UAE, US, China and Kazakhstan pavilions at Expo 2020 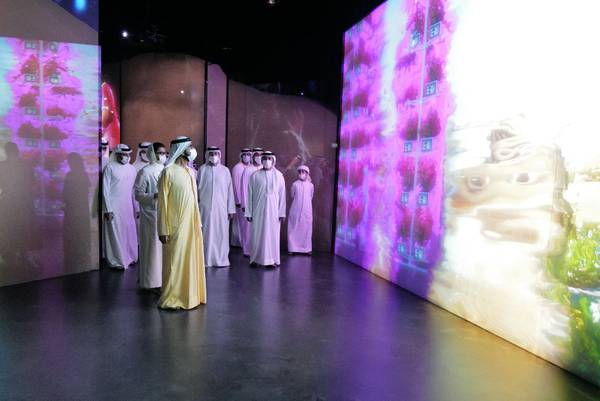 Sheikh Mohammed bin Rashid, Vice President and Ruler of Dubai, has hailed the UAE pavilion at Expo 2020 Dubai as an “architectural masterpiece”.

After a breathtaking opening ceremony show last night, Sheikh Mohammed arrived at Expo 2020 on Friday morning for a tour of the site.

He was accompanied by Sheikh Hamdan bin Mohammed, Crown Prince of Dubai, and Sheikh Maktoum bin Mohammed, Deputy Ruler of Dubai, touring the UAE, US, China and Kazakhstan pavilions.

Sheikh Mohammed’s first visit was to the UAE pavilion, designed by Spanish architect Santiago Calatrava and inspired by the wings of a falcon in flight.

Posting an update on his visit on Twitter, Sheikh Mohammed said: “During my first tour of the massive event this morning, I visited the UAE pavilion at Expo, an architectural masterpiece and unique cultural value.”

The UAE pavilion features a 60-minute tour that narrates the history and future aspirations of the Emirates.

Sheikh Mohammed later visited the US pavilion, which highlights the country’s achievements in the space sector.

That was followed by a visit to the China pavilion, where a panda robot called Youyou serves as a guide for visitors to the 4,500-square-metre building. The design of the pavilion is inspired by the traditional Chinese lantern.

The pavilion showcases the nation’s achievements in the fields of information, science and technology, education, and communications.

“I also visited the US and China pavilions … where the East and the West meet in Dubai … and communicate in Dubai … and their cultures come together in Dubai.,” Sheikh Mohamed said on Twitter.

“I also visited the Kazakhstan pavilion, our relationship with Kazakhstan is always developing, and their presence in expo is a chance to strengthen these ties.”