Qatar said to terminate contracts of over 600 school staff 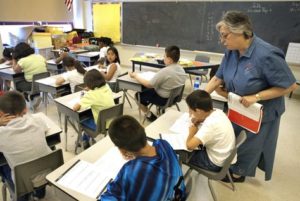 Ministry of Education reportedly sends list of nearly 650 teachers and admin staff whose services are no longer required.

Qatar’s Ministry of Education and Higher Education has announced plans for Qatarisation of academic and administrative jobs in independent schools from the next academic year.

According to a report in Arabic daily Al Sharq, the ministry sent a list of nearly 650 teachers and administrators whose services will be terminated on June 1.

Sources have also been quoted as saying there is a list of Qatari and expatriate staff to fill the vacant positions in time for the new school year.

School directors were reportedly surprised to receive the notice from the ministry, which also stated that schools must issue the end-of-service letters to their employees within a week of the decision.

While most schools on the list will lose between eight to 10 employees, others will lose up to 14 employees, including teachers, administrators, secretaries, and coordinators.