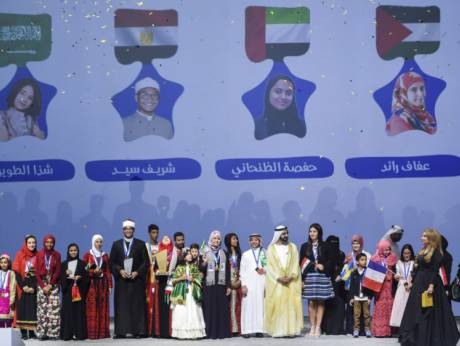 UAE calls on all Arab communities around the world to join next edition.

Dubai: The UAE on Wednesday invited Arab communities all around the globe to join the next edition of the Arab Reading Challenge.

His Highness Shaikh Mohammad Bin Rashid Al Maktoum, Vice-President and Prime Minister of the UAE and Ruler of Dubai, urged schools and students from Arab diaspora to join the Arab Reading Challenge, a project that aims to help promote cultural renaissance in the Arab world by encouraging students to each read more than 50 books a year and continuously expand their knowledge.

books were collectively read by participants

supervisors took part in the challenge

Shaikh Mohammad’s comments came after a 17-year-old girl from Palestine beat 7.4 million contestants from across 25 countries and won this year’s title as the champion of the Arab Reading Challenge.

Al Iman School (girls’ section) from Bahrain, meanwhile, bagged the $1 million (Dh3.6 million) prize for the school with the best reading initiatives in the region, while Houriya Al Thil from Morocco took home Dh367,000 for being the “best supervisor” in encouraging students throughout the challenge.

Shaikh Mohammad was impressed with the volume of Arab participation this year, which exceeded the seven million target he set at the end of last year’s closing ceremony. Participants from 41,000 schools had collectively read over 200 million books. “There is power in each letter and book and power in the word Iqra’a (read). It’s the power that creates civilisations, and when seven million Arabs come together in one project, we know that we are in the right direction,” he said.

“The Arab Reading Challenge has revealed the passion young Arabs have for knowledge; they are the ones who will build our future on the solid pillars of culture and intellect. I am proud of the seven million participants, who have shown us that we are on the right path to civilisation. The real winner today is the Arab world,” he said.

During the ceremony, Shaikh Mohammad also honoured winners in other categories and presented them awards worth Dh11 million.

Sharif Sayed Mustafa from Egypt came second and Hafsa Al Danhani from the UAE came third after the audience took part in an instant poll, choosing Afaf as the first winner.

Shaikh Mohammad added that participation in the Arab Reading Challenge is not geographically limited, and is open to any Arab who wants to compete, read in Arabic, and develop a strong intellect.

What the winners said…

I feel happy and proud because this is something I have been wanting to contribute to my nation. I hope I can reach more top positions so I can dedicate them for Palestine. I believe Palestine deserves a lot from us. My victory today is as a result of my confidence in myself and in my talents. My victory also comes as a result of my parent’s support. My mother raised me while teaching me how to read.

She used to read to me since I was a child, and thanks to efforts I have reached the first place.

In total, I have read 50 books this year for the competition but in my entire life, I have read more than 60 books. The competition helped me become more determined towards reaching my goals and made me more confident. We need such initiatives in the Arab world. I took a vow to myself to dedicate an amount of the prize to humanitarian work and the other for my university tuition. I also have an ambition to study medicine so that I can treat the people of their wounds and pain.

I will continue my mission in reading, I’m a scientific researcher and in the next 10 years I’m aiming to become a Nobel prize winner in physiology or medicine.

I’m of course in pain because I wanted to reach the first place; however, I also feel honoured to be the second place winner in the Arab world and other Arab students living in non-Arab countries. It’s an honour for me to get second place, and I congratulate the winner.

I express my thanks to Shaikh Mohammad and my parents, who helped me reach here. I also thank the supervisors who helped us reach here today.

This year the books I read covered various fields including politics, economy, culture, geology and many more. I challenged myself and did my best.

I thank Shaikh Mohammad for such a great initiative that he has lunched and I’m also proud to have been part of this journey.

This initiative unlocks a new and bright future for the young generation of Arabs, because reading and knowledge is what contributes to developing these students, and not anything else. It’s reading that brightens minds and erases darkness on nations. I’m happy to have contributed my efforts for such a great initiative.

Since Al Iman School in Bahrain was established, there has always been a vision. We had a goal set and we worked in that direction. All the work we put in, in terms of the events organised to promote reading and literacy, contributed to our success today.

The teamwork also played a big role from all the teachers and supervisors. At our school, we worked to ensure our education is beneficial. We work for the students so that we can create a wise and mature generation who is serious and works to give back to their nation.