One in four UAE 15-year-olds bullied each month: report 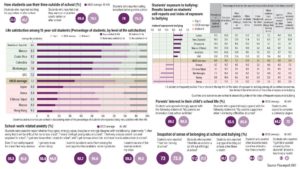 The report found that the UAE had a higher than average number of pupils being bullied but also rated their life satisfaction 7.30 on a scale of 0 to 10.

More than one in four 15-year-olds in the UAE reported being bullied “at least a few times a month,” according to the OECD Programme for International Student Assessment’s Students’ Well-Being report.

Out of 72 countries that participated in the PISA assessment, the UAE had the eighth-largest prevalence of bullying, with 27 per cent of pupils saying they had been bullied in some form at least a few times a month.

“The fact of the matter is, if it’s one out of four students that are reporting that they are being bullied, and that’s a difficult thing that they are going through, then schools are not doing enough,” said Dr Sarah Rasmi, assistant professor of psychology and counselling at the United Arab Emirates University.

“At the same time, it is difficult for schools to do more because a lot of them are understaffed, especially when it comes to counsellors.”

The report also found that test anxiety in the UAE was higher than average, with 61.8 per cent of pupils agreeing that they they “feel very anxious” even if they are well-prepared for a test.

On the positive side, UAE respondents on average rated their life satisfaction 7.30 on a scale of 0 to 10, where 0 means the worst possible life, and 10 means the best possible life. This is about the same as the OECD average.

UAE pupils were also more ambitious, as 72 per cent said they expected to complete a university degree, while the OECD average was only 44.2 per cent.

In Dubai, the Knowledge and Human Development Authority has launched a number of initiatives to help improve student well-being and promote happiness in schools. It also requires parents and students to sign a contract that spells out the “zero-tolerance policy for bullying in all of its forms”.

“Schools have a significant impact on children’s quality of life and the focus on well-being allows us to look at new ways of engaging students,” said Hind Al Mualla, chief of happiness and innovation at the KHDA.

“Success and well-being in life depend on how well students have been able to develop socially and emotionally. By embracing positive education and well-being, schools are taking a step forward in the development of character strengths and happiness.”

HTC’s upcoming flagship likely to be called HTC U 11, to come in five colours