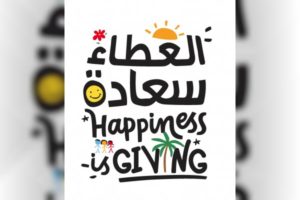 DUBAI, 30th May, 2017 (WAM) — The National Happiness and Positivity Programme has launched the “Change a Future” initiative, part of the “Happiness is Giving” campaign, to improve the lives of children across the UAE and abroad, in collaboration with the Emirates Red Crescent, ERC, Etisalat, du, as well as Abu Dhabi’s and Dubai’s Department of Economic Development.

The initiative was created following the 25th May directives of His Highness Sheikh Mohammed bin Rashid Al Maktoum, Vice President, Prime Minister and Ruler of Dubai, to mark the beginning of the Holy Month of Ramadan with great charity projects, in line with the nationwide #Year of Giving campaign.

Happiness is Giving engages the private sector, particularly, the retail sector, shopping centres, retail outlets, and megastores, encouraging organisations to donate to the Emirates Red Crescent throughout the month of Ramadan. The ERC, in turn, will donate to causes that seek to improve the quality of life for children around the world.

Ohood bint Khalfan Al Roumi, Minister of State for Happiness, said that this initiative supports the UAE’s philanthropy and fosters partnerships between the public and private sectors to affect real change in people’s lives, which helps the UAE attain its objectives and multiply its initiatives during the Year of Giving, as directed by H.H. Sheikh Mohammed bin Rashid Al Maktoum.

The initiative stems for H.H. Sheikh Mohammed’s understanding of charity and giving, Al Roumi added, quoting His Highness when he said, “We hope every person in the UAE plays their part in the efforts marking the Month of Giving in the Nation of Giving.”

The Minister of State for Happiness went on to explain that the Happiness is Giving initiative is the umbrella campaign consolidating all initiatives organised by the National Happiness and Positivity Programme to mark the Year of Giving in collaboration with the public and private sectors. She reaffirmed that this initiative will have positive effects on all segments of UAE society, which is renowned for its generosity, especially during the Holy Month of Ramadan.

Al Roumi lauded all partners who play a part in the success of the Change a Future initiative, thanking them for their role in establishing charity and generosity as a culture and key tenet of the United Arab Emirates.

The “Happiness is Giving” initiative takes place throughout the Holy Month of Ramadan and continues until the end of the Year of Giving. It is open for individuals and institutions from both the public and private sectors in the UAE. The initiative covers four main development areas that reflect the mission and vision of the Emirates Red Crescent, including health, education, food, and people of determination.

The ERC will provide essential vaccinations for polio, smallpox, and measles to children in Somalia, in addition to securing medicine for children in need in Erbil, Iraq. As for education, the Emirates Red Crescent will dedicate some of the contributions to furnish schools for refugees built by the UAE in Greece, in addition to providing prescription glasses for students.

The campaign also aims to distribute food boxes to underprivileged children in Somalia and Erbil. A part of the ERC’s contributions will also go to children with disabilities in the Jordanian-Emirati camp for Syrian refugees, supplying them with wheelchairs and hearing aids.

Dr. Mohammed Ateeq Al-Falahi, Secretary-General of the ERC, stressed that the initiative strengthens cooperation with the National Happiness and Positivity Programme, and promotes social responsibility.

Dr. Al-Falahi commended the Minister of State for Happiness for her great efforts in launching the Happiness is Giving initiative, noting that the campaign supports the Red Crescent’s programmes, its relief operations, and development projects across the globe.

He also underlined the ERC’s interest in strengthening cooperation with all government entities, to reinforce a culture of giving and virtue. “The ERC has made significant strides towards creating a series of partnerships with the community,” he said.

“This stems from our belief in the importance of fostering joint efforts for a better future, and providing social protection for the individuals and segments that the ERC sponsors,” the ERC Secretary-General concluded.