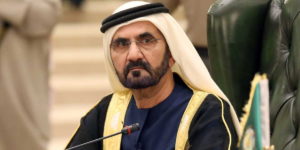 DUBAI, 10th June, 2017 (WAM)–Vice President, Prime Minister and Ruler of Dubai, His Highness Sheikh Mohammed bin Rashid Al Maktoum, received on Saturday at Zabeel Palace, top Emirati achievers from UAE’s universities, military colleges and academies, and high schools, who called to greet him on the advent of the holy month of Ramadan.

His Highness Sheikh Mohammed congratulated them for their academic excellence.

While welcoming them, Sheikh Mohammed expressed his satisfaction at meeting them in a Ramadan evening ‘away from protocol’. “We are proud of your academic achievements that place you in the first ranks and qualify to hold higher positions in the country.”

“We accept nothing but number one as this goal is attainable by young Emiratis. As long as your leadership supports, motivates and encourages you, all doors are open to you,” he said.

Sheikh Mohammed bin Rashid hosted an Iftar banquet in honour of the guests.