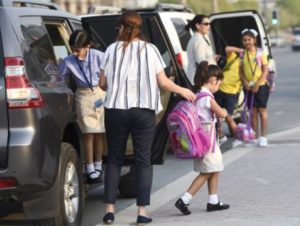 Dubai: Parents are committing a raft of mistakes when it comes to motor vehicles and children as schools reopen across the country, say police.

From overloading vehicles and allowing students to cross the road alone to leaving children inside a vehicle to walk a sibling to school doors, parents aren’t getting good marks at the beginning of the new school year, said a UAE top cop.

Speaking at the launch on Wednesday of an awareness campaign for road safety, Major-General Mohammad Saif Al Zafein, Assistant Commander-in Chief for Operational Affairs at Dubai Police and Director of the Federal Traffic Council, said the new safety effort will run until the end of the new school year.

A total of 46 accidents involving school buses were recorded in 2016, injuring 35 students in the country.

As part of the campaign, police will first educate parents about their bad habits with first-time warnings for a one-month grace period after which the full measure of the law will be taken by officers.

Police are not only targeting parents for bad driving habits.

Bad drivers who flout the law will pay heavily.

“In a new step, we will allow bus drivers to record plate numbers of motorists who ignore the stop sign. The bus driver will inform the command room to check the complaint and record it,” he warned.

Motorists failing to halt their vehicles on seeing the stop signs will be fined Dh1,000 and slapped with 10 traffic black points, warned Maj-Gen Al Zafein.

Bus drivers, meanwhile, who fail to activate the stop sign will also be penalised.

“It is important to use the sign to warn other motorists. Any driver not using the sign will be fined Dh500 and six black points,” Maj-Gen Al Zafein said.

Both infractions fall within Resolution No (178) of 2017 on traffic rules and procedures, and resolution No (91).

“The campaign will include more awareness lectures in the schools and spreading awareness through social networks. Workshops for parents, pupils and teachers will be part of the campaign to teach them about traffic signs and what to do on the roads near schools,” Maj-Gen Al Zafein said.

Meanwhile, Brigadier Saif Muhair Al Mazroui, director of the Traffic Department at Dubai Police, said he spotted a female motorist committing offences when she dropped her son to his Dubai school.

“She allowed her four-year-old son to sit in the rear seat without a seat belt and stopped in front of the school’s gate. I just warned her and didn’t issue fines. We have decided to issue fines to parents after one month of starting the school,” Brigadier Al Mazroui said.

Awareness about child protection across region is vital ​​​​​​​​​​​