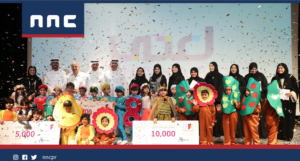 SHARJAH, 13th May, 2017 (WAM) — Lughati, the Sharjah-based initiative dedicated to supporting Arabic learning the smart way, has honoured the winners of the ‘Lughati Play Award 2’ for kindergarten pupils in the Emirate of Sharjah.

The total prize money given to the Lughati Play Award two finalists was AED 27,000, with AED 10,000 for the overall winner, AED 7,000 for the first runner up and AED 5,000 for the third place finalist. The initiative gave AED 3,000 for the Outstanding Team category and the consolation prize was worth AED 2,000.

“The Lughati Play Award aligns with the vision of H.H. Dr. Sheikh Sultan bin Mohammed Al Qasimi, Supreme Council Member and Ruler of Sharjah; his wife, Her Highness Sheikha Jawaher bint Mohammed Al Qasimi, Chairperson of the Supreme Council for Family Affairs, and Sheikha Bodour bint Sultan Al Qasimi, Founder and CEO of Kalimat Group, to empower children with their mother language. It was conceived to help them extend their use of Arabic in their education and general discourse and to foster the language as an integral part of their identity as they grow up,” said Badria Al Ali, Manager of Lughati.

The Lughati Play Award seeks to motivate children to use Arabic in stage performances, thereby igniting their imaginations and creating a platform to extend its use in everyday discourse. It is the first such competition for kindergarten pupils in the performing arts field and has been commended by the UAE Theatrical Association.

UAE highlights women’s empowerment achievements at the ‘Davos of women’