DUBAI: You wouldn’t have loved to be in Ravindra Jadeja’s shoes on Friday afternoon. Jadeja had already gone for 29 off his first five overs as Bangladesh opener Liton Das was going hammer and tongs and India had dropped two catches.

For Jadeja, it was déjà vu of the Champions Trophy final last year – a match that saw him lose his spot in limited-overs cricket for 16 months. There was an eerie feeling of Das, in nascent stages of his career, repeating the same dose in the Asia Cup final as Pakistan’s Fakhar Zaman did in the last final India had played. He was deflating the Indian team as Rohit Sharma and MS Dhoni started placing fielders following the ball, a feature that is uncharacteristic to their style of captaincy. It would have taken a lot for India to keep Bangladesh at bay on the day. 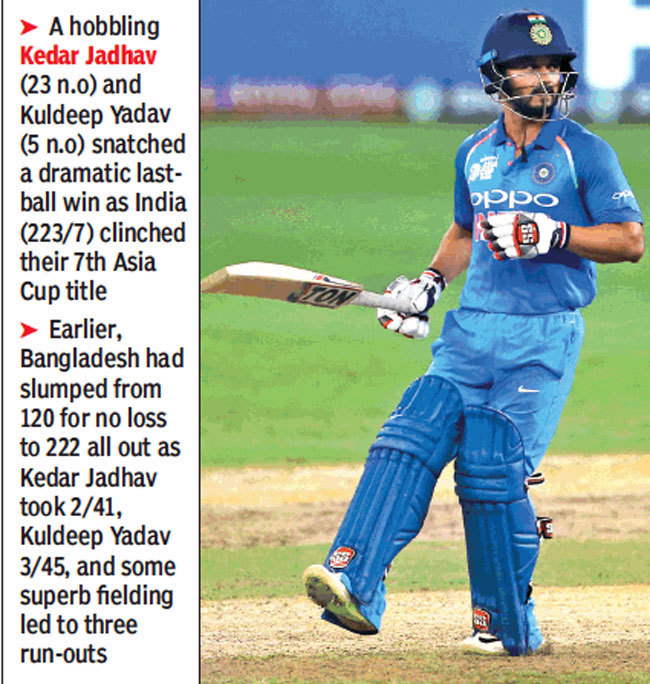 And it took India all 50 overs to chase down 223 and come out unscathed and as Asia Cup champions. For Bangladesh, it ended as a déjà vu of the T20I series final in March earlier this year. Mahmudullah speared in the final ball of the match on the pads of a limping Kedar Jadhav, the ball went for the leg-bye which gave India the only run remaining to win. Bangladesh will have to wait for their maiden multi-national title.

Bangladesh turned up with intent and shrewd planning. Right from opening the batting with Mehidy Hasan to Das’ enterprising 117-ball 121 and Mashrafe Mortaza’s captaincy kept India in check while defending 223. Once Rohit Sharma fell to the short-ball trap for 48 at the square-leg boundary off Rubel Hossain, the Indian middle-order was battling to unmask its spine and take India over the line from 83/3. 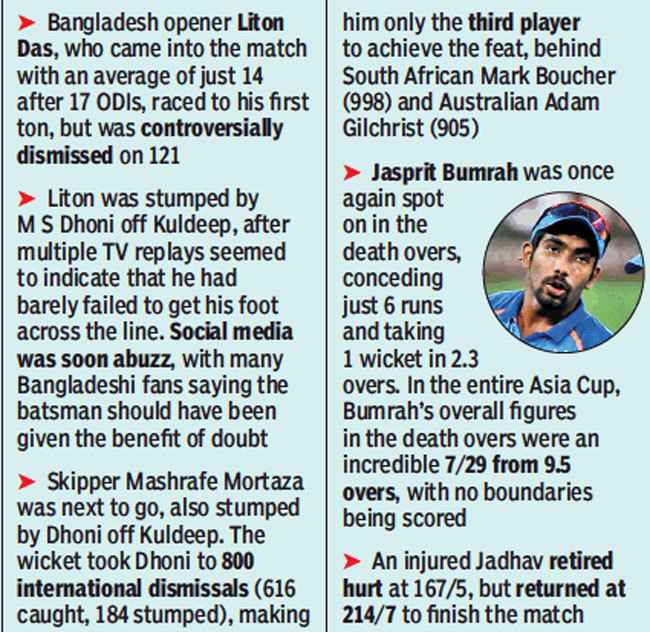 A sedate MS Dhoni, in a bid to rediscover his old self, battled to a 67-ball 36 before edging Mustafizur Rahman to Mushfiqur Rahim after Dinesh Karthik wasted another start (37), trapped in front by Mahmudullah. It was Jadeja and Bhuvneshwar Kumar, followed by Jadhav and Kuldeep Yadav, who showcased warrior-like nerve and made up for another middle-order submission. Jadeja (23) and Bhuvneshwar (21) added 45 runs off 56 balls after Jadhav walked off with a hamstring strain at 167/5 at the end of 38 overs only to come back and finish the match. Jadeja had the final laugh when the fireworks went off at the Dubai International Stadium.

Bangladesh were up for every challenge that India threw at them. A moment of brilliance came for India in the last ball of the 28th over which defines a big final and one that potentially strengthens Jadeja’s prospects in the blue shirt. Batting on 95, Das crunched Yuzvendra Chahal which looked certain to pierce the packed off-side in-field but for Jadeja’s presence. Swift as ever, Jadeja flung himself to his left, pounced on the speeding ball, found the in-form Mohammad Mithun at the same end as Das and calmly threw it back to Chahal right on top of the bails. 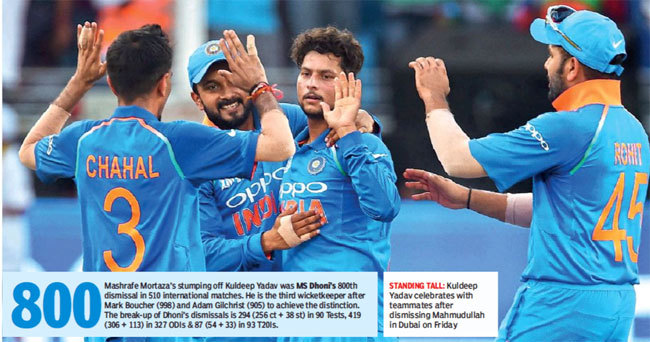 Bangladesh did everything to be holders of a multi-nation trophy, having failed to cross the line in the same tournament twice before in the last six years. They were also testing the Indian nerves in another final after the one they played in the T20I tri-series in Sri Lanka in March this year.


Virat Kohli’s emergence as an unparalleled second-innings player has got the Indian team obsessing with the idea of chasing. The romps earlier in the tournament had set the template and Rohit had no hesitation in sending Bangladesh in after winning the toss. Probably, Kohli’s absence and the middle-order devoid of confidence, including a rusty Dhoni, weren’t thought to be serious enough factors while taking that decision on Friday.

Post the 2013 Champions Trophy win, India have faltered in the business end of big tournaments. A trend that haunted Indian cricket for years since the Natwest final happened against England at Lord’s in 2002. Besides the chest-thumping, ego-boosting series wins in bilateral series at home and in Sri Lanka, West Indies and one in South Africa earlier this year, India’s one-day cricket has been a curious case study since 2013. Friday’s match, thus, grew in significance as India needed to find its core nine months to go for the World Cup, much like what happened after Lord’s in 2002. For now, the team management has to revisit their policy with Jadeja.