How teacher licensing will be beneficial 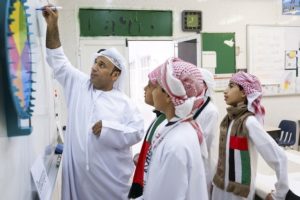 In reference to the news report Teachers from certain countries to be fast-tracked through UAE’s new education licensing scheme (April 12), my husband was part of this pilot programme and completed it a few months ago. He was told then that he was exempt from three of the four areas. Why? He holds a valid teaching licence from the United States in addition to his degrees.

What people don’t realise is that a person can currently teach in a secondary school in this country with only a university degree in their subject without a teaching licence.

However, a science major, for example, may not be a good science teacher, so this new requirement is a good thing. Now all teachers will have to hold an actual teaching licence. And those who graduated from teaching programmes in countries that have strong standards should be exempt from taking a test on their teaching skill set all over again. I imagine other countries will be added at some point.
Suzanne Arruda-Wessel, Abu Dhabi

That was predictable. There are issues regarding teacher standards from some countries, but I have doubts regarding the licensing model.

If not careful, it could cause problems for the migrant labour force the country depends on in the pursuit of meeting so-called “international standards”.

There is not one set of international teacher licensing standards – each country or even state has their own. Sadly, this testing process does little to prove whether someone can teach and has everything to do with gaming the industry.

In general terms, this is good for education in this country as there are currently some people in front of classes every day who shouldn’t be in charge of a flock of sheep, let alone guiding learning for a class.

It will also streamline the complex qualifications status with so many nationalities. However, it comes at a time when good and well-experienced teachers are in short supply and may put extra pressure on recruitment. We will see.

A bad teacher will still be bad and a good teacher will always be good. A multiple choice test isn’t going to improve anything. It is just another way of making life hard for educators. Good teachers aren’t magically going to appear because of a licence scheme.

It’s like a driving licence – It doesn’t guarantee a good driver.

I don’t care whether Umm Ahmed, mentioned in your story Doctors want licences revoked for medically unfit drivers in UAE (April 10), has to run errands or go to work. It’s a real concern that she puts the lives of other people, including her children, at risk each time she’s behind the wheel. It’s time for the authorities to take some concrete action.

A simple solution is to impose a requirement for a fitness certificate from a hospital for the renewal of the driving licence.

The United Airlines incident is a textbook example of how not to deal with a crisis (United Airlines under fire after passenger dragged off overbooked plane, April 12).

Although the people who took the man off the plane were not actually United Airlines staff, the action is unacceptable. It was also disappointing that other passengers just pulled out their phones and started making videos in the vain hope that their videos would go viral.

Instead of filming they should have helped the man.

Fewer than half of teachers pass UAE licensing test