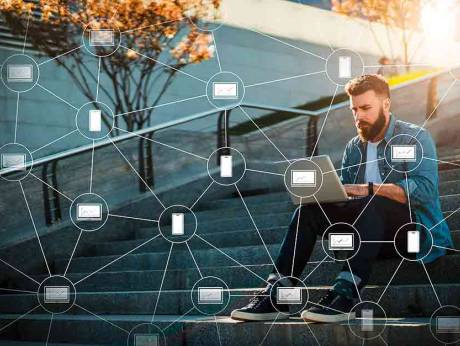 As Dubai positions itself at the centre of this new technology, courses in the sector can set students on a lucrative career path.

The world’s most infamous cryptocurrency, bitcoin, has been on a roller-coaster ride and might even end up in a poorhouse in a few years. In contrast, the technology that powers it — blockchain — has emerged a star with the potential to transform almost every industry. The tech can make businesses more resilient to hacks and frauds while speeding up transactions and bringing down costs.

This growing interest in blockchain is also creating brand-new job opportunities and lucrative career paths, especially in Dubai, which wants to become the blockchain capital of the world. At the Unlock Blockchain Forum, held in January, Dr Aisha Bint Butti Bin Bisher, Director-General of Smart Dubai, noted that the city already had 20 cases of public sector blockchain uses and “it’s only the beginning”.

Amr Al Saadani, Managing Director and Financial Services Lead for Accenture in the Middle East and Turkey, observes that in financial services, blockchain has the potential to enhance cross-border payments, trading activities and smart contracts. In the retail space, blockchain can increase transparency, facilitate warranties, improve the shipping process and reduce counterfeiting goods.

“We have only just begun to understand what blockchain is truly capable of,” he says, adding that organisations can harness blockchain’s potential to deliver transparency and rebuild trust.

Kirill Nikolaev, a consultant to several organisations investing in blockchain, says that blockchain will soon be a mainstream technology, much like the cloud, making it almost impossible for organisations
to ignore.

“Right now, 100 per cent of global financial groups, central banks and related organisations have working groups and R&D projects focused on blockchain. Majority are testing blockchain prototypes to see what opportunity they can uncover in the near future with this infrastructure instrument.”

Blockchain is also being used in diverse ways — Nikolaev offers the example of Vimana Global, of which he is a board member. The start-up is building a blockchain-based and -regulated airspace ecosystem that can manage flight paths of thousands of autonomous aerial vehicles, providing air mobility programmes in smart cities such as Dubai. Nikolaev predicts that blockchain-related programming and engineering jobs will be most in demand, while project management — in particular, managing decentralised project teams — will also be a key opportunity.

Mechelle Buys du Plessis, Managing Director — UAE, Dimension Data, insists blockchain-related opportunities in this region will be endless. “We have seen interest from several verticals, including healthcare, finance and logistics. Many are grappling with the concept of blockchain and are in early stages of adoption.”

She says the Dubai Government has been leading the charge with a well-defined blockchain strategy. “We have seen a leading uptake of blockchain with Smart Dubai, as it sets out on a journey of adopting blockchain to provide simpler and secure services across multiple government agencies to better serve citizens, residence and tourists.”

However, blockchain is relatively new and there aren’t enough skilled resources available in the market. “Traditional IT skill is quickly being replaced by an entirely different skill set requirement. I firmly believe that developing skill in coding, APIs and automation will be an absolute requirement as we move to adopt blockchain. ”

A unique use case of blockchain is the Avaya Happiness Index, developed in the UAE, which tracks customers’ satisfaction across key service areas. Ahmad Helmy, Director of Advanced Solution Architects, International Markets, Avaya, explains that by combining blockchain architecture with automated data analysis, businesses and governments can access industry-wide, real-time customer insights in ways not possible before.

“The transformational use of blockchain is impacting key drivers of economic growth, with the logistics and supply chain sector being one of the biggest.”


Though emerging technologies such as blockchain will require specific and niche skill sets, Helmy believes the most essential skill students should work on developing is the art of critical and creative thinking. Learning a high-level programming language will also be invaluable. He feels these computer science languages require little effort to learn and yet allow users the ability to build secure automation tools, master simplification and innovate within their chosen field.