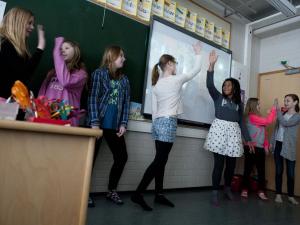 Finland’s plans to replace the teaching of classic school subjects such as history or English with broader, cross-cutting “topics” as part of a major education reform have been getting global attention, thanks to an article in The Independent, one of the UK’s trusted newspapers. Stay calm: despite the reforms, Finnish schools will continue to teach mathematics, history, arts, music and other subjects in the future.

But with the new basic school reform all children will also learn via periods looking at broader topics, such as the European Union, community and climate change, or 100 years of Finland’s independence, which would bring in multi-disciplinary modules on languages, geography, sciences and economics.

It is important to underline two fundamental peculiarities of the Finnish education system in order to see the real picture. First, education governance is highly decentralised, giving Finland’s 320 municipalitiessignificant amount of freedom to arrange schooling according to the local circumstances. Central government issues legislation, tops up local funding of schools, and provides a guiding framework for what schools should teach and how.

Second, Finland’s National Curriculum Framework is a loose common standard that steers curriculum planning at the level of the municipalities and their schools. It leaves educators freedom to find the best ways to offer good teaching and learning to all children. Therefore, practices vary from school to school and are often customised to local needs and situations.

The next big reform taking place in Finland is the introduction of a new National Curriculum Framework (NCF), due to come into effect in August 2016.

It is a binding document that sets the overall goals of schooling, describes the principles of teaching and learning, and provides the guidelines for special education, well-being, support services and student assessment in schools. The concept of “phenomenon-based” teaching – a move away from “subjects” and towards inter-disciplinary topics – will have a central place in the new NCF.

Integration of subjects and a holistic approach to teaching and learning are not new in Finland. Since the 1980s, Finnish schools have experimented with this approach and it has been part of the culture of teaching in many Finnish schools since then. This new reform will bring more changes to Finnish middle-school subject teachers who have traditionally worked more on their own subjects than together with their peers in school.

What will change in 2016 is that all basic schools for seven to 16-year-olds must have at least one extended period of multi-disciplinary, phenomenon-based teaching and learning in their curricula. The length of this period is to be decided by schools themselves. Helsinki, the nation’s capital and largest local school system, has decided to require two such yearly periods that must include all subjects and all students in every school in town.

One school in Helsinki has already arranged teaching in a cross-disciplinary way; other schools will have two or more periods of a few weeks each dedicated to integrated teaching and learning.

In most basic schools in other parts of Finland students will probably have one “project” when they study some of their traditional subjects in a holistic manner. One education chief of a middle-size city in Finland predicted via Twitter that: “the end result of this reform will be 320 local variations of the NCF 2016 and 90% of them look a lot like current situation.”

You may wonder why Finland’s education authorities now insist that all schools must spend time on integration and phenomenon-based teaching when Finnish students’ test scores have been declining in the most recent international tests. The answer is that educators in Finland think, quite correctly, that schools should teach what young people need in their lives rather than try to bring national test scores back to where they were.

What Finnish youth need more than before are more integrated knowledge and skills about real world issues, many argue. An integrated approach, based on lessons from some schools with longer experience of that, enhances teacher collaboration in schools and makes learning more meaningful to students.

What most stories about Finland’s current education reform have failed to cover is the most surprising aspect of the reforms. NCF 2016 states that students must be involved in the planning of phenomenon-based study periods and that they must have voice in assessing what they have learned from it.

Some teachers in Finland see this current reform as a threat and the wrong way to improve teaching and learning in schools. Other teachers think that breaking down the dominance of traditional subjects and isolation of teaching is an opportunity to more fundamental change in schools.

While some schools will seize the opportunity to redesign teaching and learning with non-traditional forms using the NCF 2016 as a guide, others will choose more moderate ways. In any case, teaching subjects will continue in one way or the other in most Finland’s basic schools for now.