Emiratis not ready for their pre-university year to be phased out, officials say 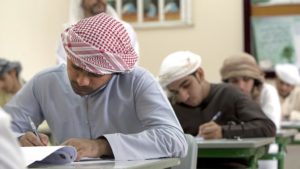 New target set for 2021 as too few school graduates are ready to go straight into first year of university and instead must complete the foundation year first.

Plans to phase out the foundation year that many public school graduates must take before gaining direct entry into state universities have been put on hold, according to education officials.

Emiratis who fail  a high school exit test that measures their level of English readiness in grade 12 must complete the foundation year before going to university and plans were afoot to raise standards to the extent that it would no longer be required by the end of next year but officials have admitted that was too ambitious.

“They were not able to achieve the result of having student English scores high enough to avoid foundation, so there is still foundation needing to be done,” said Dr Warren Fox, chief of higher education for the Knowledge and Human Development Authority.

To be considered for direct admission into a degree programme at one of the UAE’s public universities, Emirati students need to earn a minimum score of 5 on the International English Language Testing System (IELTS), or at least 1,100 on the Emirates Standardised Test (EmSat). Those who fail to achieve this grade can opt to enroll for the foundation, or academic bridge programme, offered by local colleges and universities to raise their English proficiency.

The 2018 target for ending the foundation programme was set during a Cabinet retreat in 2013 as part of a wider education overhaul and confirmed at the Federal National Council by Sheikh Hamdan bin Mubarak, the then Minister of Higher Education.

Officials said the high costs associated with the foundation programme – previously reported to consume about one-third of the post-secondary school budget – cut into higher education funding for research, innovation and new programmes. It also places students in a state of academic limbo, as they don’t earn college credit for the work they do in foundation or academic bridge programmes.

The public school curriculum has also undergone massive reforms designed by the MoE to raise standards, including introducing new subjects, textbooks and phasing in bilingual education. In August last year when the curriculum revisions were announced, Dr Hamad Al Yahyaei, the MoE’s director of Grade 9 to 12 curriculum said: “This improvement is meant to tackle several issues in the education system in the UAE. One of them is to make sure that we keep enhancing the students’ readiness for higher education and competitiveness in the job market.”

A second goal identified by Dr Al Yahyaei was “to make sure that 100 per cent of the students, by 2018-2019, can get into college without a foundation year”.

“The new goal – which is still a bit ambitious – calls for reducing and trying to eliminate the enrollment of students in the foundation year,” said Dr Fox. “That is what it is now – it is in UAE Vision 2021.”

Dr Abdullatif Al Shamsi, vice-chancellor of the Higher Colleges of Technology, said the positive effects of the public education reforms are already evident. Last year, for example, he said 23 per cent of new students entered the HCT’s academic programmes without having to enroll for the foundation year. This is an improvement from 2014 when The National reported that 20 per cent of students were ready for direct entry to university at the federal institutions.

“That percentage has been rising every year,” said Dr Al Shamsi. “And that is simply because of the improvements that is happening now at the general education level. They are doing a lot, they have put in a lot of effort. But the efforts takes time.”

Setting 2021 as a target for ensuring Emiratis achieve a 5 IELTS score that will allow them to enter university degree programmes is “realistic,” said Dr Al Shamsi.

“It is achievable,” he said. “But you cannot phase it out 100 per cent because you will always have some students who are struggling with the English language.”

UAE youth turn their attention to renewable energy and sustainability