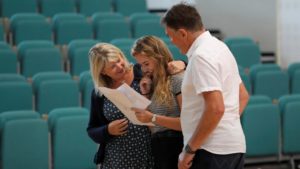 The British exam system underwent many changes this year as part of a three-year phased programme to improve academic standards.

The reforms also aim to tackle grade inflation – as A’s and A*’s have doubled in the past 20 years – and to help universities identify high fliers, according to educational experts.

“This year, 13 A-Level subjects have been reformed, including all the Sciences, and these are being examined in the new format,” said Fiona McKenzie, the head of School and University Placement at independent education consultants Gabbitas.

The former system also gave pupils an opportunity to resit modules in January or June so they could improve their grades.

“Some subjects also had a coursework element which was a researched piece of work done in class,” Ms McKenzie said. “All of these [new] factors have made this year’s exams much tougher in terms of workload and pressure.”

She said the drive to improve academic standards was another factor which made exams harder. “This year’s students have been faced with some tough challenges as the guinea pigs for the new system,” she said. “Whereas we might have seen a high percentage of students achieving top grades in previous years, there are fears that this year’s grades will be much lower. This will impact on some students’ university offers which may cause significant challenges in securing places on top courses.”

However, with more than 50,000 places advertised in the Ucas Clearing system, she said she was confident that all pupils would be able to find a programme at a good university.

Pupils in Dubai, however, seemed mostly unfazed by the reforms with 30 per cent of Dubai College’s A-level pupils scoring all A’s and A*’s and 75 per cent heading to UK universities.

“This summer is the first time that students, teachers and universities have received results from the new style, which affects thirteen subjects, including Art, Biology, Chemistry, Physics, Computer Science, Economics, English and History. It is widely recognised that the content of the new A-Levels is more difficult, especially in the sciences, and it has been anticipated that results and university placements will drop compared to previous years.”

He said it would be unfair if pupils’ university offers are adversely affected. “It takes roughly three years for students and teachers to become familiar with the nature and requirements of new assessments, meaning that we can have greater confidence that any improvements in performance after this time were due to meaningful gains in that subject area, rather than just test familiarity,” Mr Lambert said.

“Comparisons across cohorts in the early years of a new assessment should therefore be made carefully, to avoid drawing unfair conclusions about a cohort’s performance simply because it was one of the first groups of students to take the test.”