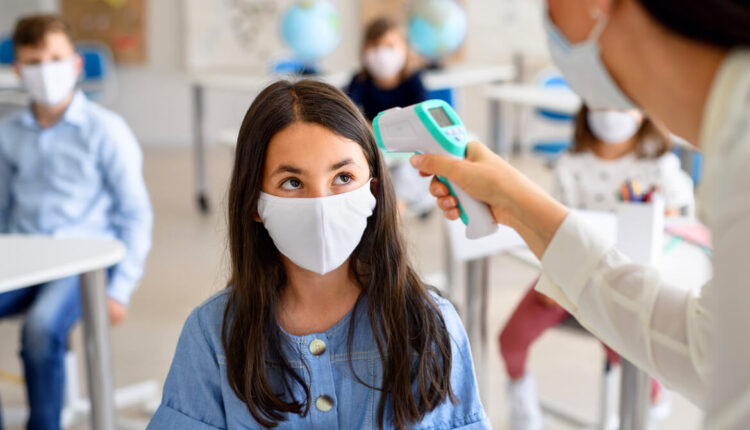 Hundreds of thousands of private school pupils across the UAE returned to classrooms for the first day of the new academic year on Sunday.

A mix of nerves and anticipation was in the air as learners reunited with friends and teachers.

At Delhi Private School Dubai, more than half of the 4,000 pupils enrolled were back for in-person classes, its largest attendance since the pandemic began.

Marc Leo, 15, a Year 10 pupil at the school, said classmates were excited to be back.

“It’s much easier to be in school rather than studying online. It was a huge change but one we needed to make,” said Marc.

“There is some nervousness about so many pupils being in school. It’s going to be a big shift and we will have to adjust to it.

“It’s been nearly two years since we have seen a full school but we are excited, and we also have sports back.”

Fellow Year 10 pupil Gauri Unnikrishnan, 15, said she was glad to be able to resume in-person lessons and was happy to follow Covid-19 measures for the safety of herself and others.

“Coming to school for in-person learning is much better and if I have to wear a mask and follow some protocols for that, it’s OK,” she said.

Many pupils at the school returned to in-person classes for the first time since the start of the pandemic.

Sanskar Pradhan, 5, a pupil in kindergarten at Delhi Private School Dubai, was among them.

“When I read on my laptop, I don’t get enough time. I need more time to ask my questions,” he said.

Many schools in the country have an orientation week planned to help pupils readjust to classroom life.

At Delhi Private School Dubai, teachers will focus on pupils’ well-being on the first day, and have conversations with children so that they can discuss any problems they face.

Kindergarten pupils at the school started the day with art and exercise.

While pupils in some classes exercised with their teachers early in the day, others put their creative hats on as they designed caps with their names.

“We want to ensure that all our pupils are okay. Many pupils were unable to travel and some travelled but had family members who fell ill,” said Rashmi Nandkeolyar, principal at Delhi Private School Dubai.

“On the first day, teachers spend time having conversations with pupils and playing games with them. Through the week, we will continue to see who needs support.

“We are looking forward to having all the children back on campus next month.

“The biggest challenge will be to have 100 per cent pupils back for face-to-face learning if we have to maintain a one-metre distance between two pupils. The last one-and-a-half years have been spent by many children studying at home so the biggest change will be coming on campus. “

Joy for parents and teachers in Abu Dhabi

Michael Makarem kissed his four-year-old twin sons Justin and Kade on the forehead as he dropped them off for what he hopes will be a year uninterrupted by the Covid-19 pandemic at The British School Al Khubairat in Abu Dhabi.

“I think the kids are very excited to be back,” said the 42-year-old American lawyer.

“We are hoping to have a complete school year in school this year.

“They had a great summer, they travelled and now feel so refreshed for the new school year, and as parents we are really excited.

“Their social skills can only develop in school and by being among their peers, I think they learn more being in the classroom.”

The school was expecting to admit 1,300 pupils on Sunday.

“Today we are bringing in all of our primary school pupils except for nursery, and our year seven and year 12,” said Mark Leppard, the school’s headmaster

The school has been preparing for the wide-scale return of its pupils since the end of the previous academic year.

“We switched immediately to what we had to prepare for this year. We did a lot of work in terms of facilities. We have a brand new reception area, new meeting rooms… and on top of that all the Covid-19 requirements,” said Mr Leppard.

“We wanted the children to have a great experience coming back in.”

Staff have worked hard during the summer months to ensure the school met current Covid-19 rules.

“We had to re-layout the classrooms; the new requirement is to have one metre of social distancing instead of 1.5, so desks and boards have been moved around, and then one-way-system had to be reviewed because we changed then offices and reception.”

“Lots of requirements have come out very late, but the goal was to make it safe for the pupils,” said Mr Leppard.

Rhianna McPherson, a year 13 pupil who was not due to attend classes till Monday, welcomed lower grade pupils in the reception area at The British School Al Khubairat.

“As a senior prefect, I showed them around their classes and briefed them on the Covid-19 regulations and the one-way system,” said the 17-year-old.

“I am happy to meet all the new pupils and very glad to be back in school.”

STEMMING THE BRAIN DRAIN: IMPORTANCE OF STARS OF SCIENCE AND QF’S INNOVATION…