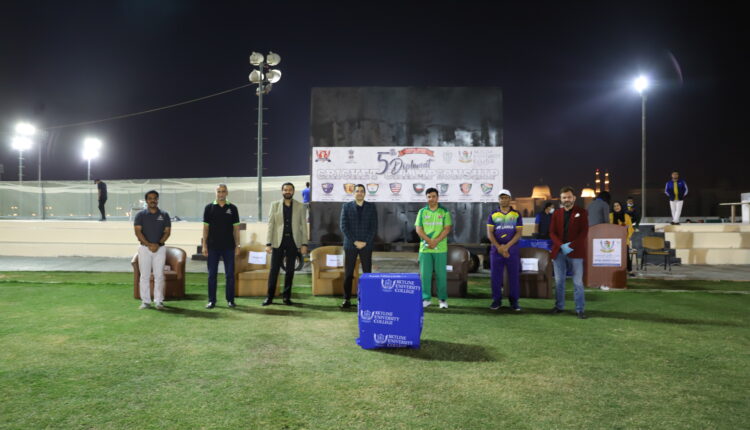 The Consulate of Pakistan bagged the trophy during the 5th Diplomat Cricket Championship, which ran from January 29 to January 30, 2021, at the SUC Cricket Ground.

Mr. Nitin Anand, the Vice Chairman of Skyline University College and the Chairman of its Executive Council, delivered a speech emphasizing the importance of sports.

“Skyline University College, as a multi-cultural community, utilizes various unifying instruments to ensure that stakeholders from various cultural backgrounds learn together in harmony. One of these instruments is sport. Sports, especially cricket, have been part of the Skyline culture. And we are delighted to be part of the Diplomat Cricket Championship, which started five years ago under the patronage of the Consulate General of India and the support of various consulates. The Diplomat Cricket Championship is an annual event that serves as a way for the employees of the consulates to relax and unwind from their busy schedule. It is also a platform for strengthening cooperation and promoting positive communication and respect among the dignitaries in the UAE.”

Mr. Anand also reminded everyone to find joy in various activities like sports, but continue to practice physical distancing and ensure their health and safety. He also thanked the Consul Generals, dignitaries, and the participating teams for making the 5th Diplomat Cricket Championship a success.

Skyline, under the patronage of the Consulate General of India and in cooperation with various consulates, has been organizing the Diplomat Cricket Championship annually to strengthen cooperation and promote positive communication and respect among the dignitaries in the UAE.

FOSM – Artificial Intelligence – What it is and why it matters